The First 10 Years - A Celebration 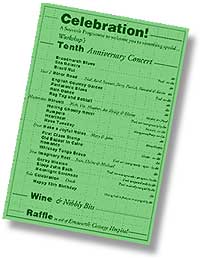 Why do people come to Adult Education Guitar classes?
Because they want to play Guitar!

But what do Adult Education Lessons really offer?
Cost-effective lessons, yes. The chance to learn, yes. But the chance to play?

Workshop is the place to play. Not to “do homework” but to play, play & play.

The problem with life is that one is too busy living it to remember everything that happens! So our dusty archives sometimes yield nothing but a hint of what actually went on in some of the early Workshops. But there’s a big story to tell, nonetheless!

This is the story of the first ten years of Workshop...

One of our Director's pupils, Tony, asked if it was possible to have a forum in which the skills of the lessons could be put into practical use. Workshop was Derek's answer. We met on 20th April 1988 at Tony’s house in Wallis Road Waterlooville and tramped up a large flight of stairs to be greeted by a tiny little flight to the top floor, in a room set into the roof.

The initial band of people squashed into the room for a Workshop containing 6 handwritten pieces of music and 3 chord sheets. How times have changed!

Meetings were on Wednesdays and continued fortnightly till 13th July 1988.

Small in number, the group was nothing if not keen, reconvening well before August was over, and meeting until 14th December - a long term if ever there was one!

That season, Derek's new beginners joined, on 16th February 1989, and Workshop moved to what became our first permanent home at Purbrook Hall on Thursdays, and we locked the fee to just two-thirds of the local Evening Class leisure price, a discounted rate which has continued ever since.

Meetings again continued into July, and Workshop had run full circle. A circle